As of 17 May 2022, the Coalition has registered 164 reports of torture and other ill-treatment. Of these (in descending order), 44 came from Taldykorgan, 41 from Almaty, 18 from East Kazakhstan Oblast, 13 from Taraz, 11 from Kyzylorda, 9 from Atyrau, 7 from Shymkent, 6 from West Kazakhstan Oblast, 6 from Pavlodar, 4 from Aktobe, 3 from Kostanay, 1 from Karaganda, and 1 from North Kazakhstan Oblast.

From those, 153 were reported to have been committed against men (13 underage) and 11against women. In 88 reported cases the Coalition provided lawyers for the victims and in 6 cases it facilitated access to psychological assistance and in 24 cases it provided access to medical assistance including for the purchase of medicine.

Of all of the cases supported by the Coalition 69 were registered in the Unified Pre-Trial Investigation Register (UPIR) under the article of torture (article 146 of the Criminal Code of Kazakhstan) and 3 cases under the article of abuse of power or abuse of office (article 362 of the Criminal Code of Kazakhstan). 4 allegations were investigated without subsequent registration in the UPIR. Currently, forensic examination has been ordered in 52 criminal cases.

The Coalition is continuing to state that investigations into torture or other ill-treatment are being conducted without any commitment whatsoever to identify and prosecute the perpetrators and to seek redress for the victims.

As of today out of the cases reported by the Coalition the investigations have been suspended, terminated or not started – all “for lack of corpus delicti (elements of a crime)” – on 1 case in Pavlodar, 1 case in Almaty, 1 case in WKO, and 2 cases in Kostanay Oblast. All these dismissals have been appealed.

One of the cases that have been dropped is that of Aslan DZHAMALIYEV from Uralsk. On the night of 4 to 5 January, Aslan was detained by three police officers and, without any explanation, they twisted his arms and pushed him into a police van. There, three other uniformed police officers, with the words “you are going to die”, beat Aslan with their hands, feet, fists, a police baton on his head, legs and other parts of his body, swearing and insulting him. In the police van, they pressed Aslan against the side of the van and searched him, taking away his mobile phone. All this without any protocols drawn up. While he was being beaten the policemen reproached Aslan for their own feelings of social exclusion, as if they were taking revenge for their low salary, as they said, and numerous loans, threatening him by saying that we “come to the police station now, and you’ll be sorry you were ever born”. Upon arrival to the Uralsk City Police Department, other police officers took Aslan to one of the offices on the second floor, which according to Aslan himself, had video surveillance cameras, and there they forced him under pressure to sign what he said were unknown documents, threatening him that he would “not leave here until he signs them”.

Afterwards, Aslan was released home, and his mobile phone was returned, with all information being erased from its memory. On the same day, January 5, Aslan registered his injuries with a traumatologist, which included “bruising of soft tissues of the head, subcutaneous hematomas of the parietal region on the right, bruising of the cervical region” and others. The regional prosecutor’s office, to which the lawyer that had been provided to Aslan by the Coalition reported the torture, forwarded the report to the local Anti-Corruption Service. The case was registered under Article 146, part 2 of the Criminal Code “Torture”. However, three months later, on 6 April, Aslan received a text message on his phone informing him that his criminal case on torture was dismissed “for lack of the elements of a crime”. Dzhamaliyev’s lawyer was not provided with the resolution itself and was denied an opportunity to familiarise with the case file on various pretexts. The Coalition will continue to seek justice in Aslan Dzhamaliyev’s case.

The failure to conduct or delays in conducting a forensic medical examination during the investigation has been reported, in particular, in cases of torture that had been registered in the East Kazakhstan oblast in relation to, for example, Ivan Sergeyevich KICHKIN, aged 40, Rinat Maratovich Әliyev, aged 30, Aleksey Alekseyevich KOLMAGOROV, aged 22, and Kainar KӘSHEN, aged 21, and others.

For instance, the day after his detention, on 11 January, I.S. KICHKIN, a citizen of the Russian Federation, was beaten by officers of the Department of Internal Affairs of Ust-Kamenogorsk. In addition to beatings with truncheons, hands, and feet on various parts of the body, Ivan Kichkin was tortured with an electric shocker and had a plastic bag pulled over his head three times to make him suffocate, after the third time he lost consciousness. Drunken police officers threatened to shoot Kichkin, holding a gun to his head and firing blank shots.

After Rinat ӘLIYEV was detained from his home on 13 January and taken to the police department in Semey, in an attempt to force him to sign documents police officers strangled and kicked him until he lost consciousness. Rinat regained consciousness in the hospital, where his fractured forehead was stitched up.  After the hospital, Rinat was taken to the temporary detention facility in Semey, where he was held without bedding or even a mattress, on suspicion of participating in mass riots.

Aleksey KOLMAGOROV was detained on 7 January near the Republic Square in Ust-Kamenogorsk, and immediately his phone and personal belongings were confiscated.  Without explaining the reasons and grounds for his detention, Aleksey was brought to the Dynamo sports centre at 73, Kazakhstan Street, Ust-Kamenogorsk. At Dinamo, Kolmagorov was illegally detained for one and a half hours, during which time he was continuously beaten by police officers. As a result of the beating, Aleksey’s three front teeth were knocked out and he had a large bruise on his head. During the torture, Aleksey Kolmagorov repeatedly lost consciousness and vomited. After the beatings in the Dynamo sports centre, he was taken to the Department of Internal Affairs of Ust-Kamenogorsk, then to the temporary detention facility of Ust-Kamenogorsk, and later to the pretrial detention centre of Ust-Kamenogorsk, where he was detained under Article 272 Part 2 of the Criminal Code (participation in mass riots).  Kolmagorov’s pre-trial detention was later changed to house arrest and a pledge not to leave until trial.

KӘSHEN Kainar was beaten in the temporary detention facility in Semey, where he was taken with a gunshot wound to the thigh without medical assistance.  Kainar and other detainees were laid on their stomachs and according to Kainar were jumped upon each by three police officers in a row. The detainees were taken to the toilet and had their heads shoved into the toilet bowl. Also, for the duration of 12 hours Kairat and others were forced to stand with their heads against the wall without the slightest movement. If they moved, they were beaten with a truncheon, kicked in the head and body, and tasered several times. According to Kairat, during the entire 12 hours, no one was allowed neither to have water or go to the toilet. Kairat said he was “called an oralman” (Kazakh for ‘resettler’), beaten with hands and truncheon on his ribs, nose, head, threatened that they would rape him with a stick.

The Coalition will continue to monitor the situation with investigations into torture in the aftermath of the January events.

The Coalition stands ready to provide legal and psychological assistance to victims (or alleged victims) of torture and other unlawful treatment.

Reports of torture, cruel, inhuman, degrading treatment by law enforcement or other government agencies, or the bodies or individuals involved, can be submitted to the Coalition’s coordinating organisation:

Anna Solodova, lawyer, coordinator of legal and psychological assistance throughout the Republic of Kazakhstan +77081120938, smirnova.ig.anna@esdaulet 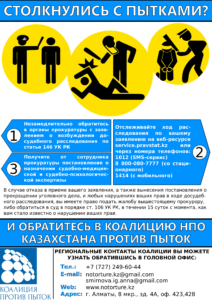